The Covenanters were opposed to the interference by the Stuart Kings in the affairs of the Presbyterian Church of Scotland. The Stuarts believed the spiritual head of the Scottish Church was the king. The Covenanters believed the 'Head of the Kirk' was Jesus Christ.
Many Scots signed the National Covenant in 1638 and from then until 1688 persecutions and punishments of all kinds; fines, torture,executions, murder and transportation were used in an attempt by the Authorities to quell this rebellion. In 1670 field meetings of the Covenanters were made treasonable and preaching at such events became a capital offence.
The earliest member of the Willison Family of whom we have knowledge is John 'The Covenanter' Willison, who lived in Glengeith, near Elvanfoot, 3 miles south of Crawford, Scotland.
In 1688 just before the revolution in which King James VII was disposed, James Renwick the last Covenanting Martyr was hanged for his religious beliefs in the City of Edinburgh.
James Renwick had baptised John Willison the Covenanter's grandson. Following Renwick's death John continued to provide asylum to those being sought by Government troops and was constantly harried for his actions and beliefs. However he managed to live to see the revolution and witnessed greater toleration of his religious beliefs and practices in his later years.

More information about John can be found in the book 'Traditions of the Covenanters' by Robert Simpson.

His gravestone is also featured on the Scottish Covenanter Memorials Association   website where you can find out much more information about John the Covenanter and his fellow martyrs and about the work of the Memorial Association in general. 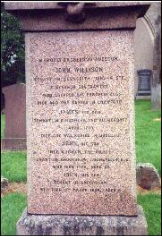 Mention of John was made in a stainglass window at Elvanfoot Church (sadly no longer) which bore the inscription...
"In memoriam, John Willison, on whose farm this church is built; a staunch Covenanter grievously persecuted in 1663. In his steading was hidden a Shunammite chamber for shelter and escape. Erected by his descendants, the grandchildren of John Willison, Parishholm, Douglas, who died in 1884"

At Crawford Church, Lanarkshire which was built in 1875, a second window reads...

"erected by John Willison, Tenant of ParishHolm, Douglas in memory of his venerated ancestor John Willison, Tenant of Glengeith in the times of the persecutions 1663 - 1688 when he - a staunch Covenanter- provided shelter to many of his suffering brethern, concealing them in a place built for the purpose off his cowshed called 'The Shunammite's Chamber'. He escaped his persecutors and died in his bed some years later and was buried in this churchyard, where the spot cannot now be found. Hence this memorial of him in this sacred house."

This is an excellent place for you to add a paragraph and let your visitors know more about you and your services. Easily edit by go to tab pages and content and click edit.